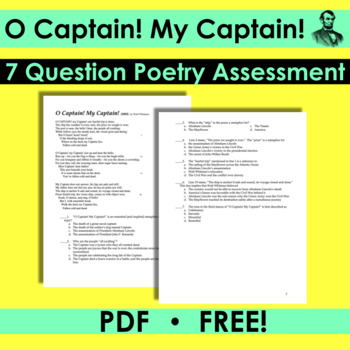 Personification : Whitman has used personification to give human qualities to lifeless objects. The speaker struggles with balancing his personal feelings of loss with the celebratory mood resulting from the successful voyage. 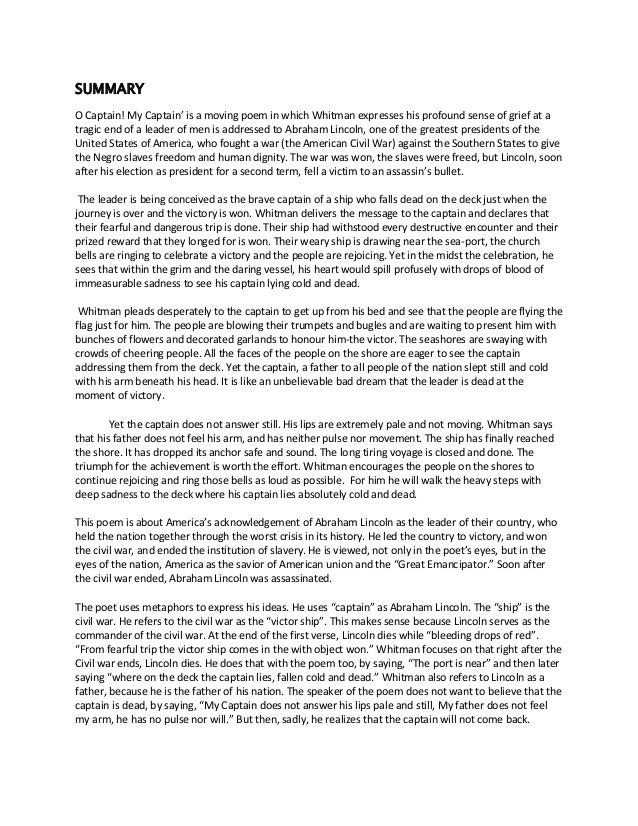 Imagery : Imagery appeals to the five senses of the readers. The keel has been thrown in to steady the moving ship. 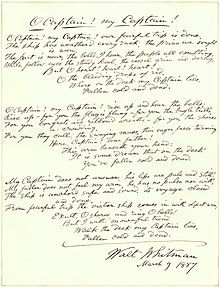 This particular poem explores a variation on that theme: the self vs. The sailor reminisces about the trip to be extremely arduous yet they crossed the line with a trade-off.

The breakdown of emotions is surging from the sailor as the fallen comrade lies beside him, in all his glory but dead. Often hailed as "the father of free verse," Whitman tended to write his poems without following any kind of ordered poetic form. While the Civil War claimed many lives, it led to the reunification of the Union, so many Americans felt similarly divided. O Captain! Major Themes: The poem comprises sentiments of the speaker at the demise of his captain. Slowly and gradually, he realizes that the change is permanent and life must go, regardless. The poet refers to the fallen captain as "father," representing his deep respect for president Lincoln and Lincoln's role as father of the Union. The poem is classified as an elegy or mourning poem, and was written to honor Abraham Lincoln, the 16th president of the United States.

The poem is an extended metaphor: 1 Lincoln is the captain who has "fallen cold and dead," having been assassinated shortly after the Civil War had ended; 2 the "fearful trip" is the Civil War; 3 "the prize we sought" is the preservation of the Union, something which both Whitman and Lincoln felt was the supreme reason for fighting the war; 4 "the ship" is the United States.

The speaker, torn between relief and despair, captures America's confusion at the end of the Civil War.